The Taskforce on Nature-related Financial Disclosures (TNFD) was formally launched in June. This important initiative will create a reporting framework to help organisations manage biodiversity risks and identify opportunities. Storebrand was a member of the taskforce's Informal Working Group, a 74-strong team that began work in 2020 to devise the practical recommendations for its scope and workplan.

Alongside its unveiling, David Craig and Elizabeth Maruma Mrema were announced as TNFD Co-Chairs. David is CEO of Refinitiv and Group Leader of Data & Analytics Division at London Stock Exchange Group, and Elizabeth is Executive Secretary of the UN Convention on Biological Diversity. Both are excellent appointments to lead the taskforce's ambitious and complex work in shifting global capital flows away from nature-negative outcomes towards ones that are positive for biodiversity.

The launch of TNFD was endorsed by the G7 Finance Ministers, underlining its importance and the urgency of the problem it seeks to tackle. According to the World Economic Forum¹ $44 trillion of economic value creation – equivalent to more than half of global GDP – is moderately or highly dependent on nature and therefore exposed to the risks of biodiversity loss. This threat is huge; a 2020 Global Assessment Report from the Intergovernmental Science-Policy Platform on Biodiversity and Ecosystem Services (IPBES)² found that around a quarter of animal and plant species are at risk of extinction with one million facing elimination already.

TNFD aims to help arrest this steep decline in our biodiversity by targeting “no net loss by 2030 and net gain by 2050". To achieve this, the taskforce will deliver a framework by 2023 based on four corporate pillars – governance, strategy, risk management, and metrics and targets. This will provide companies and financial institutions with a complete picture of their impacts and dependencies on nature, and associated risks and opportunities. 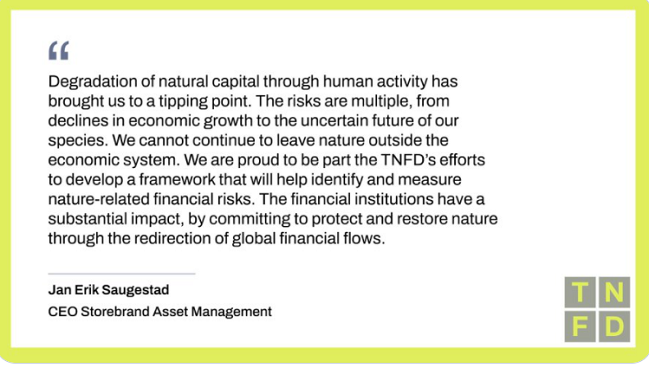 TNFD is aligned with the Finance for Biodiversity Pledge that Storebrand has signed which commits us to reporting publicly on our contribution to global biodiversity goals by 2024, as well as collaborating and sharing knowledge, engaging with companies, assessing impact and setting targets. It now has 55 signatories from 15 countries, representing over €9 trillion in assets.

Storebrand's own work in tackling nature loss began a decade earlier. Biodiversity has been part of the sustainability analysis our fund managers have included in their risk management and company selection processes since 2010. This coincided with the groundbreaking The Economics of Ecosystems and Biodiversity (TEEB) Report, a landmark study which is the foundation for the Green Economy movement that we know today. TEEB was a global UN initiative focusing on “making nature’s values visible”. Storebrand had the great pleasure to launch the special TEEB report for business and biodiversity together with Pavan Sukhev, to raise awareness and identify both risks and opportunities that biodiversity and ecosystem services pose to that particular sector.

The major cause of biodiversity loss in recent years has been land use change, with deforestation a key driver. Our action against this began in 2013 when Storebrand was among the first investors to divest from palm oil and we announced a formal deforestation policy in 2019 to ensure our investment portfolios no longer contribute negatively by 2025.

Biodiversity has also been at the forefront of our active ownership strategy. It is one of Storebrand's key engagement themes and we proactively seek to influence companies operating or planning projects in valuable or vulnerable ecosystems. A recent example is Bunge, where we filed a resolution at the company's AGM calling for the elimination of deforestation in its supply chain that received support from 99% of shareholder votes. Once TNFD has delivered a reporting framework, we expect all our holding companies to report in line with its recommendations.

At Storebrand we believe that partnership is the new leadership, particularly when it comes to protecting our natural resources. TNFD is an important initiative in reversing biodiversity loss that will involve financiers and corporates across developed and emerging markets to achieve a common goal. We are committed to supporting the taskforce in rebuilding the world's ecosystems and we will continue to update you on its progress.